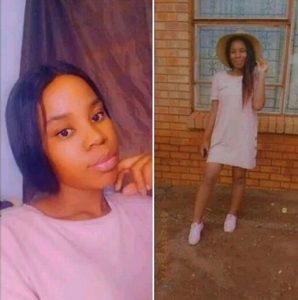 A 25-year-old woman, Lebogang Matlou, was brutally murdered by her boyfriend in Limpopo, South Africa.

The 30-year-old suspect and a female suspect alleged to be his ex-girlfriend, were scheduled to appear before the Mokerong Magistrate’s Court on Wednesday, October 20, after they were arrested for allegedly killing Lebogang.

The body of the deceased was found lying in her boyfriend’s home at Mosesetjane in Mahwelereng policing area on Sunday.

According to Limpopo spokesperson of the South African Police Service (SAPS) Brigadier Motlafela Mojapelo, the deceased was stabbed multiple times.

“The police were called to the scene and on arrival, they found the body with visible injuries and immediately commenced with investigations,” he said.

The boyfriend and the female suspect, 23, were arrested on Tuesday and charged with murder.

“The provincial commissioner of police in Limpopo, Lieutenant General Thembi Hadebe has strongly condemned this incident of gender-based violence and has commended the police for apprehending the suspects a day [after]the brutal killing,” said Mojapelo.

Martha Matlou, mother to deceased said, “Lebo was home the whole Saturday doing home chores. She went to bed, later she told me that her sister asked her to bring cash at a wedding just before 21h00. I slept hoping she will come back. In the morning our neighbor asked me to check if Lebo is home because he just heard that there are police vehicles at his boyfriend’s home and it seems like there was a fight between them.”

“On my arrival I was then told that this sad and tragic incident might have happened around 03h00. My child was brutally killed and chances are that the suspect will not be locked in jail. Because of that family history of killing people and always getting away with murder I advised my child to end the relationship but she ignored me. It is unfortunate she had to die like that,” said Mma Matlou.

Rakgoale says it is disheartening to still see incidents of GBVF continuing in the province despite vigorous awareness campaigns that are being undertaken by government and civil society.

MEC Rakgoale was speaking at Mosesetjane village outside Mokopane where she was visiting the family of the deceased on Tuesday.

MEC Rakgoale says social workers will continue with the provision of psychosocial support to the family of the victim and other affected parties. 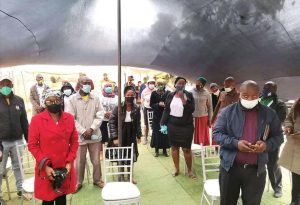 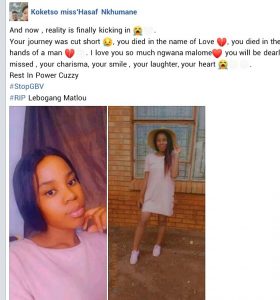 Previous Article#EndSARSAnniversary: Victims of police brutality yet to get justice one year after- Amnesty International
Next Article Kidnapped Niger state monarch regains freedom after 45 days in captivity