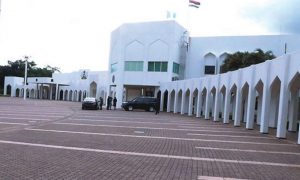 Government officials have been warned by the presidency against betrayal of trust.

Umar was quoted saying by the State House Deputy Director (Information), Abiodun Oladunjoye, that the presidency will not hesitate to make an example of staff who breach trust.

“We expect that the ACTU State House team that is being inaugurated today will not betray our trust and confidence, otherwise we shall be compelled to make an example of you in the event of any erring behaviour. I think that’s where we start from today.

“On our part, the management will lead by example; We are making this commitment today and hold ourselves to high standards of behaviour so that ACTU doesn’t have to worry itself about looking at the side of management.”

Umar who also congratulated members of the Unit, said they were chosen out of the staff of the State House specifically because of their integrity and their effort in service delivery.

“The subject of good governance is straightforward and it’s all about playing the game by the rules. For me, that’s the bottom line. Government activities are governed by rules and at the entry point, every one of us around this table was given basic training.

“That includes understanding the Public Service Rules, as well as the Financial Regulations, and every one of us ought to, and is expected to apply the rules and be guided by them in all our transactions.”