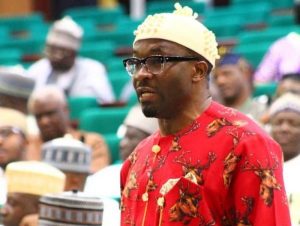 Spokesman of the House of Representatives Benjamin Kalu has said he will be vindicated when judgement is passed on a lawsuit challenging his qualification to contest for an elective post.

His main opponent in the party primary, Okechukwu Ezeala had accused him of certificate forgery and impersonation, arguing he did not do a legal name change before contesting the election.

In the originating summons, Ezeala alleged that Kalu’s primary and secondary school certificates had irregularities, saying the surnames on his certificates are completely different from his current names. The lawsuit was initially filed before an Abuja High Court in 2000 but was rejected.

Commenting on the lawsuit on Friday August 6, Kalu claimed it was a calculated attempt to smear his image.

“May be the name Rep. Benjamin Kalu is so sparkling clean for a politician who is rising.

“So, this is their way of attempting to sprinkle imaginary dents on my image. As a lawyer, I should have confidence in our judicial system and they have not failed me previously. They won’t start now.

“It is sub-judicial to begin to discuss the content of the matter in detail. Let’s be patient and allow the court to take a position on this.

“Again, my constituents, friends and family should not worry it will end in praise for what God cannot do does not exist. They shall gather and take counsel but it shall not stand, only the counsel of God shall stand.
“Let them dent my image. I am confident truth will clean it. After all when I signed for politics, I signed for smear campaigns like this.

“I have my eyes on the ball, it does not matter how threatened they are. I am going for the goal and not perturbed at all.

“They know this, that’s why they are paying all media platforms to discuss my simple change of name as illegal.

“The last I checked, it is within my right to choose on how to be addressed and to document it legally as prescribed by law. So, because I changed my surname, it makes my certificates forged certificates. Quite laughable.”