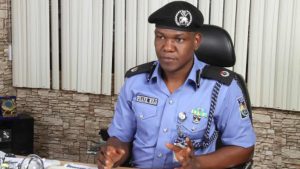 Police Spokesperson, Frank Mba has defended the use of tear gas on some June 12 protesters in Abuja.

While a Channels Television correspondent who covered the protest in Abuja insisted that he did not observe any sign of violence from the protesters before the police disrupted their parade, Mba in an interview on same news platform said the use of teargas was an isolated case in Abuja where protesters turned violent.

He also said that no Nigerian either in Lagos, Abuja, Port Harcourt, Kano or anywhere is currently in detention as a result of the isolated incident.

“We had an isolated case in Abuja where some of the protesters became unruly and in line with international best practices, police fired teargas at them.

“And that is an acceptable mode of engaging violent protesters anywhere in the world, whether it is in Abuja, Lagos, Paris, London, or New York or California. That is internationally accepted.

“We would have problems if we had fired live bullets at them, but when you fire teargas at protesters to disperse them, you are not in breach of any known code, either nationally or internationally.

“I also want to use this opportunity to state clearly that no citizen, either in Lagos, Abuja, Port Harcourt, Kano or anywhere, is currently in detention as a result of this isolated incident.

“When you protest in contravention of these set of conditions I have given, clearly you are coming in direct conflict with the laws of the land, and the police will never stand by idly and watch you create problems for the entire polity.”

Previous ArticleNDLEA intercepts 100,000 bottles of codeine syrup at Onne Port
Next Article I don’t know why National Assembly is afraid of referendum – Ozekhome